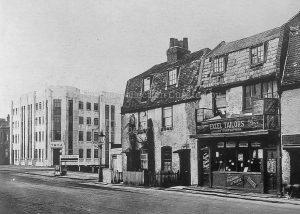 YMCA London City and North is an independent charity affiliated to the YMCA movement that was founded in 1844 by Sir George Williams. Williams was a London drapery worker who formed a study group with colleagues in response to concerns over the welfare of his fellow workers. From this humble beginning, the Young Men’s Christian Association (YMCA) was formed.

Today, YMCA has grown to serve more than 65 million people in 120 countries regardless of age, religion, race, gender, sexual orientation or socio-economic background.

YMCA London City and North is a newly merged organisation formed of two well-established London YMCAs, City YMCA London and YMCA North London. Both organisations are steeped in history and deeply rooted in the communities they serve.

YMCA North London (formerly Hornsey YMCA) has been providing accommodation to young homeless people for almost 120 years, having opened its first purpose-built hostel in Crouch End in 1903. In 1959, following substantial bomb damage from WW2, a large proportion of a later hostel had to be rebuilt, although the Art Deco annex was retained and now houses the Fitness Centre. The hostel is still in operation today and provides a home to more than 300 residents annually making it North London’s largest homeless hostel.

City YMCA London has an equally historic past. In 1972 City YMCA opened its first 16-storey youth accommodation on the iconic Barbican Estate at the heart of the City of London. In 2012 the building was returned to the City of London Corporation after providing homes to young people for 40 years. Since then the charity has opened Monarch Court, an 87-room hostel in Hackney, and built a brand new flagship building, LandAid House, just a short walk from where it all began at the Barbican Estate.

We use cookies on our website to give you the most relevant experience by remembering your preferences and repeat visits. By clicking “Accept All”, you consent to the use of ALL the cookies. However, you may visit "Cookie Settings" to provide a controlled consent.
Cookie SettingsAccept All
Manage consent

This website uses cookies to improve your experience while you navigate through the website. Out of these cookies, the cookies that are categorized as necessary are stored on your browser as they are essential for the working of basic functionalities of the website. We also use third-party cookies that help us analyze and understand how you use this website. These cookies will be stored in your browser only with your consent. You also have the option to opt-out of these cookies. But opting out of some of these cookies may have an effect on your browsing experience.
Necessary Always Enabled
Necessary cookies are absolutely essential for the website to function properly. This category only includes cookies that ensures basic functionalities and security features of the website. These cookies do not store any personal information.
Non-necessary
Any cookies that may not be particularly necessary for the website to function and is used specifically to collect user personal data via analytics, ads, other embedded contents are termed as non-necessary cookies. It is mandatory to procure user consent prior to running these cookies on your website.
SAVE & ACCEPT